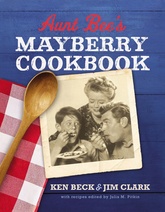 All the flavor of "The Andy Griffith Show's" Mayberry

Celebrate the 60th Anniversary of "The Andy Griffith Show" with an expanded and newly formatted edition of Aunt Bee's Mayberry Cookbook. Aunt Bee and her friends have stirred up a cookbook that brings home good old-fashioned, down-home cooking plus some of Mayberry's more unusual meals. You'll discover favorite Mayberry-style dishes for all occasions, inspired by Aunt Bee's unsurpassed talents in the kitchen and her special love for her family and friends.

Aunt Bee's Mayberry Cookbook is also chock-full of wonderful, rare photographs from "The Andy Griffith Show" and offers entertaining glimpses into "the friendly town." Many of the recipes were favorites from members of the show's cast and crew.

Please enter your email address below. You will receive a link to reset your password.

Are you sure you want to decline the Featured Selections?

A Guide to Our Simplified Prices

Buy Member Credits during the first 10 days of the month for only $ each and redeem them for any book on the site.

Credits will not expire, so you can use them at any time!

All pre-orders are sold at the Membership Price or for one Member Credit, and are shipped separately.

Visit the FAQs for more details