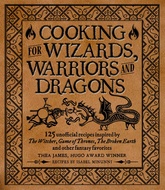 Cooking For Wizards, Warriors And Dragons: 125 Unofficial Recipes Inspired By The Witcher, Game Of Thrones, The Lord Of The Rin

Release Date: August 31, 2021Presales available for members only. To purchase this title, please log in or join now.

Cooking for Wizards, Warriors and Dragons gathers an extraordinary collection of recipes inspired by the greatest fantasy literature, films and TV series of all time. There are 125 mouth-watering recipes in all, including fantastic dishes suggested by Andrzej Sapkowski's The Witcher, George R.R. Martin's A Song of Fire and Ice, Robert Jordan's The Wheel of Time, and many others.

Some dishes are well-known–Elven Lembas bread, anyone? Others capture the mood and emotions of a particularly memorable scene, such as the meal that was eaten prior to Game of Thrones' fan favorite Battle of the Bastards. Accompanying each recipe is an introductory essay that shines a bit of light on the tales, heroes, villains or histories that inspired it.

Please enter your email address below. You will receive a link to reset your password.

Are you sure you want to decline the Featured Selections?

A Guide to Our Simplified Prices

Buy Member Credits during the first 10 days of the month for only $ each and redeem them for any book on the site.

Credits will not expire, so you can use them at any time!

All pre-orders are sold at the Membership Price or for one Member Credit, and are shipped separately.

Visit the FAQs for more details